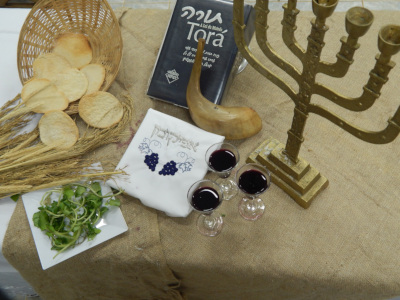 One of the questions that I am asked from time to time, is why we do not celebrate communion on a weekly or regular basis. I thought it would be helpful if I put up my reply to this question from a brother in another messianic fellowship.
I do understand that most messianic groups and their followers come out of various Christian denominations as they begin to be drawn out of “Babylon” by the Ruach Ha Kodesh (Holy Spirit). But in coming out of the Christian Church system, there is still a lot of unbiblical Christian doctrine that comes out with them.
This is also what happened with Luther in the Reformation, when he brought a lot of Catholic traditions and unbiblical doctrines with him and it became a normal part of Protestant Evangelical and Pentecostal traditions and doctrines.

The Question asked me:

One Shabbat as we were about to take communion, a friend quickly made some comment to me, saying that you didn’t and it was all Scriptural. Originally, I thought she was only talking about one aspect of communion but it seems that you don’t keep communion at all.

While Yeshua did not eat the last Passover with his disciples, saying that he wouldn’t eat it with them again until the Marriage Supper of the Lamb, he did however instruct them to keep what is now called communion, as a memorial to him, a practice which goes back to Abraham.
(Gen 14:17-20)
Sha’ul kept up this practice with his Gentile converts, also stating that in doing it, we proclaim Yeshua’s death until he comes. (Luke 22:14-20; 1 Cor 11:23-26)

I’d be interested to hear why you believe that we no longer need to honour Yeshua’s instruction to do this as a memorial to him.

My answer to the Communion Question:

Thanks for your question and interest in the answer, even though it is different from yours. Your response is the standard approach or understanding of the Christian Church on the subject. But I have come to see it from a Torah and Apostolic perspective which is based on Pesach, or Passover.

For me Christian Communion is based on the Roman Catholic Mass with a few changes and was anti-semitic. Just like Sunday worship, Easter, Christmas etc, was based on the anti-semitic hatred of Rome against the Jews.
This is how I see the Scriptures in answer to your question.

We do ‘need to honour Yeshuah’s instructions’, but He never said to keep communion, as ‘communion’ is not a Scriptural word for this remembrance. And non Scriptural words raise red flags for me, like rapture, trinity, and many other words that have no Scriptural basis, for they usually lead to false doctrine.

Luke 22:14-10. The first things to note is that this is at Passover and foundations the whole understanding. Yeshuah then states that Passover and His death will find its fulfilment when the Kingdom of God comes and we are to do this in memory of Him. No mention of communion here, or any command to do it weekly.

1 Cor 11:23-26. Once again Paul is speaking about Passover and what Yeshuah revealed to him about it. He quotes Yeshuah saying, ‘Do this in memory of Me, each time you do it, it is a proclaiming of His death until He comes again.’ No mention of a weekly communion here either. In verses 17-22 Paul speaks of a coming together to celebrate Yeshuah’s supper, which was at Passover. They were there for a meal, not just matzah and a cup of wine.

The context of Paul’s teaching to the Gentile believers in Corinth was the proper understanding of the Feast of Pesach and how to conduct themselves. In Chapter 5:1-8 Paul speaks into the case of sexual immorality among them. He points out that this sin, left undealt with, would result in the sinful celebration of Pesach. This is the sin of not discerning Yeshuah’s body and eating and drinking judgement upon themselves as he mentions in Chapter 11.

The emphasis of Scripture is always the Torah, which highlights the celebration of the Sabbaths, and the Feasts of YHVH in their proper order, as the complete message of the Kingdom of God. These observances tell us who will enter the Kingdom, who won’t, and how to keep them. The apostles followed and taught the Torah (and the prophets) as the message of YHVH for all the earth to follow with nothing added or changed.

Gen 14:17-20. This has nothing to do with ‘communion’, which was an unknown concept or belief. All scripture is prophetic, always pointing to what is to come in the plan of our God. Melchizadek is a type of Yeshuah, King of the city of Peace. The bread and wine are prophetic that Yeshuah the Messiah would come to give His life to become the King of the Kingdom of Heaven and Saviour of mankind. It speaks of the coming celebration of Passover under Moses, and fulfilled in Yeshuah, doing exactly with His apostles what Melchizadek did with Abraham, the father of Israel.

We choose to celebrate this as a call to Pesach truth of YHVH’s Feasts, not a Christian doctrine of communion. I certainly don’t judge others who choose to keep communion each week. For me it is a part of the many changes that I believe the Ruach has led us to make in our Messianic journey.

Shalom and Blessings to you.

Let me just add that along with Communion, the Christian Church has instituted Easter as their official celebration of God's Feast called Pesach in Hebrew, or Passover in English. These two celebrations, Communion and Easter, have bypassed Y’Hovah’s command to keep the Feast of Pesach at the right time according to His calendar based on the cycles of the moon; not the sun.